Kathinka Sinha-Kerkhoff: was Director Research at the Asian Development Research Institute (ADRI) till 2010. She obtained her Ph.D. from the Centre of Asian Studies in Amsterdam (CASA). She resides in Ranchi (India) and is currently finishing a book on the social history of tobacco in Bihar.


Syed Farid Alatas is Associate Professor of Sociology at the National University of Singapore. He obtained his Ph.D. in Sociology from the Johns Hopkins University. His work has been widely published in journals and edited books. Currently, he is finishing a book on the thought of Ibn Khaldun. He is also working on another book on the Ba‘alawi Sufi order.

To order your copy at www.manoharbooks.com
Posted by Unknown at 9:22 pm No comments: Links to this post

Beyond the Myth: Indian Business Communities in Singapore 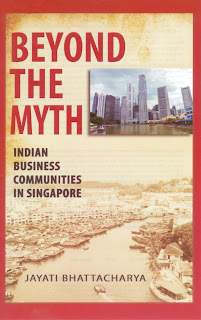 Beyond the Myth: Indian Business Communities in Singapore
By- Jayati Bhattacharya

This book is a macro-study of Indian business communities in Singapore through different phases of their growth since colonial times. It goes beyond the conventional labour-history approach to study Indian immigrants to Southeast Asia, both in terms of themselves and their connections with the people’s movements. It looks at how Indian business communities negotiated with others in the environments in which they found themselves and adapted to them in novel ways. It especially brings into focus the patterns and integration of the Indian networks in the large – scale transnational flows of capital, one of the least studied aspects of the diaspora history in this part of the world. The complexities and overlapping interests of different groups of traders and businessmen form an interesting study of various aspects of these trading bodies, their methods of operation and their trade links, both within and outside Singapore. The book also chats their mobility and progress, in terms of both business and social status. The research aims to construct linear threads of linkages through generations and situate them in the larger framework and broader paradigms of business networks in Singapore.
In shedding light on aspects of Indian connectivities to Southeast Asia, the narrative is particularly relevant in the context of India’s economic rise. This study raises economic, social and cultural issues regarding the transition.

Jayati Bhattacharya is a Visiting Research Fellow at the Nalanda- Sriwijaya Centre, Institute of Southeast Asian Studies (ISEAS) in Singapore with research interests in business history and diaspora studies in South and Southeast Asia in the modern period. She is currently the coordinator of the project on Comparative Diasporas at the Centre. Dr. Bhattacharya has received her Ph.D. from the Jawaharlal Nehru University, New Delhi. She was awarded a Junior Research Fellowship by the Jawaharlal Nehru Memorial Fund, New Delhi and a scholarship by the Indian Council of Historical Research (ICHR), New Delhi to pursue doctoral studies. Dr Bhattacharya has teaching experience as Lecturer in Loreto College, Darjeeling, India and as Guest Lecturer at Qingdao University, People’s Republic of China. She has also contributed articles on business history in the colonial period of Bengal.

To order your copy at www.manoharbooks.com
Posted by Unknown at 9:19 pm No comments: Links to this post