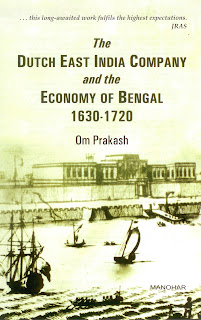 Om Prakash reveals the central role played by Bengal in the Dutch East India Company’s activities in India in the seventeenth and early eighteenth century and the resulting integration of India into the world economy. By the early 1700s, Bengal provided almost 40 per cent of value of Asian goods sent to Holland, and over half of all textiles exported from Asia by the Company had carried goods from Bengal all over Asia. Drawing on little- used documents in the General State Archives in The Hague, the author discusses the place of the Company in Bengal from the beginnings of its trading operations there in the 1630s until about 1720.
The book clearly demonstrates Bengal’s crucial part on the development of world trade networks that occurred after the discovery of the Cape route to the East Indies, and analyses the implications of the Company’s trade for Bengal’s economy, with special reference to import of precious metals. It examines not only the role played by Bengal in the Company’s trading activities but the structure of Indian merchants’ trade, as well as the system of manufacturing products in the region.

To order your copy at www.manoharbooks.com
Posted by Unknown at 9:48 pm No comments: Links to this post

Region, Culture, and Politics in India

Region, Culture, and Politics in India

In recent decades the South Asian subcontinent has seen an often-contentious nationalistic and rationalistic splintering which sometimes leads to horrifyingly bloody consequences. In India the process of transforming conceptual and cultural regions into administrative and political units continues to this day, with ever-more-refined regional identities becoming the basis for carving up larger states into smaller ones. For centuries there have also been many regions in India that provide a framework for people’s cultural lives without attaining political salience.

This book presents a multidisciplinary study of the processes through which regions and
regional consciousness get formed and maintained in India. The fourteen essays brought together here examine various modes through which people in different parts of India express, create, and foster a sense of their area as a distinct, coherent, and significant unit to which they belong in some important way. The modes examined include language, oral and written literature, festivals, pilgrimages, everyday rituals, domestic wall-calendars, caste identity, religious identity, and political movements. The contributors to the volume belong to a wide variety of disciplines in the humanities and social sciences: linguistics, literature, folklore, history, religious studies, sociology, and political science. The regions they discuss range in location from Kerala to Punjab, and in size from a few square kilometers of the Sringeri area to the whole Hindi-speaking region of north India, with two essays focusing on a single city each.

Rajendra Vora is Lokmanya Tilak Professor of Politics and Public Administration at the University of Pune..

Anne Feldhaus is Professor of Religious Studies at Arizona State University. She has published more than ten books and twenty articles on the religious history and geography of Maharashtra.

To order your copy at www.manoharbooks.com

Posted by Unknown at 9:42 pm No comments: Links to this post

This book deals with rural uprisings in the Mughal subas of Agra, Delhi and Ajmer during the late seventeenth and early eighteenth centuries which left a lasting impact on the polity,
society and economy of the region and played a decisive role in limiting the fortunes of the Mughal empire.

The book traces the history of the Jats who were the principal leaders and constituted the major support base of these revolts.

A unique but hitherto unnoticed feature of the revolts was the formation of a multi-caste coalition of zamindars against the Mughal jagirdars in the Braj-Mewat region. The rebels usually took collective decisions in secret gatherings, shared information among them through letters and often expressed their hostility by attacking imperial symbols of power and seats of local administration such as thanas and qasbas. All these modalities of the action of the rebels are brought out in this study.

The study shows that by the 1730s the rebels had successfully shaken the imperial control in the region. The assertion of the power of zamindars found its expression in the expansion of zamindaris at every level. The rise of Jat power in the neighbourhood of Agra and Delhi is an important event of eighteenth-century north Indian politics. This book brings out the subtle processes through which Jat rebels became rulers.

This work covers the period of Mughal decline and inchoate formation of post-Mughal states and contributes to the existing literature on the Mughal crisis in the seventeenth-eighteenth centuries.

R.P. Rana is Reader in the Department of History, University of Delhi.

To order your copy at www.manoharbooks.com
Posted by Unknown at 9:35 pm No comments: Links to this post